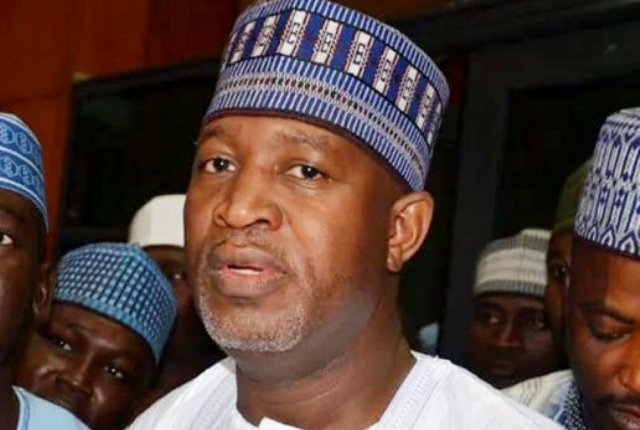 Nigeria’s Minister of Aviation, Hadi Sirika, on July 11 claimed that it is safe to be in an aircraft cabin without physical distancing amidst the COVID-19 pandemic.

The trip was to assess the airport’s readiness for resumption of domestic flights following the coronavirus-induced lockdown of the nation’s aviation sector.

The claim was published in many national dailies including The Nation, ThisDay and Guardian.

It has also generated a lot of public debate and reactions from Nigerians.

Sirika in the news report said “However, let me explain the mechanics and the going ons in an airplane that makes it safe in COVID-19 period. Airplanes are designed in such a way that the ambient air at altitudes is clean. It is not contaminated.

“The air is dropped in the aircraft, pressurised and because of pressurisation, the temperature of the air goes up to 200 degrees which is twice boiling water and there is no bacteria or virus that can survive it and it is suddenly cooled to about 2 degrees centigrade and then it is passed to a filter.

“So, it is not coming from the cockpit to the rear, it is from the ceiling downwards and it drops on the floor and gets circulated.

“This circulation happens every two minutes. So, on a flight from Abuja to Lagos, the circulation will happen like 27 to 30 times. With this, it is ensured that it is more hygienic to be in an airplane than to be in an operating theatre in the hospital” .

Sirika added  that “With this mechanism in place, everything will be safe provided that we are decontaminating the airplane before we enter and decontaminating after we leave and also cleaning all the possible surfaces that one will touch.

“If this continues, then everyone is safe to remain in the cabin seated next to each other with the mask on. So with this, yes you can be without physical distancing but in the departure and arrival halls and everywhere including the buses, you must remain physically distanced like at least six feet or two metres.”

The minister made two claims:

Findings obtained by The ICIR from Embraer, one of the leading global aircraft manufacturers, show that keeping safe physical distance on an airplane may not be necessary for one major reason; because “cabin air circulation and ventilation inside an aircraft are carefully engineered to disperse and re-direct contaminants.”

It states further: “In fact, most aircraft exchange their entire volume of cabin air 20 to 30 times more frequently than the air in an office, and 5 to 6 times more than hospitals.

“The air in an Embraer E-Jet cabin is completely refreshed at least 20 times every hour. The air circulates through strategically placed vents and upper and lower air inlets around the overhead bins.

“We conducted a series of CFD (Computational Fluid Dynamics) tests and simulations of cabin air flow years ago during development of our E-Jets.

“Our objective was to ensure that airborne contaminants were effectively directed away from passengers. In other words, droplets, like those generated by talking, coughing, and sneezing, are dispersed vertically and channelled away from other passengers as much as possible.

“We found that the correct positioning of the PSU gaspers in relation to a person’s head, and the resulting airflow, creates a kind of air curtain, or air barrier. The cone-shaped flow pattern from the gasper directs particles to air return grills located near the cabin floor. This minimizes cross-contamination between rows although the seat banks themselves serve as natural blocks to exhaled droplets. Forward-facing seats also minimize direct face-to-face passenger interaction.”

Embraer noted that the most common droplets that people expel are between 4 and 8 microns in size. “The heavier ones fall close by and collect on surfaces, like seats and clothing. The smaller ones, however, can remain suspended.”

“Aircraft-grade High Efficiency Particulate Air (HEPA) filters, like those on every E-Jet, are extremely efficient. In fact, they’re 99.97 per cent effective in trapping airborne particles and other bio-contaminants as small as 0.3 microns.”

Furthermore, a briefing paper on the ‘Cabin air quality – Risk of communicable diseases transmission’ for the  the  International Air Transport Association, IATA, states that “the risk on airplanes is probably lower than in many confined spaces because modern airplanes have cabin air filtration systems equipped with HEPA filters.”

Using the European air filter efficiency classification, The IATA  describes HEFA filter as any filter element rated between 85 per cent and 99.995 per cent removal efficiency.

In an interview with The ICIR, Professor Sunday Omilabu, a Professor of Virology at the College of Medicine, University of Lagos – Lagos University Teaching Hospital (LUTH), said the claim by the aviation minister that it is safe to be in an aircraft without physical distancing “may be hinged on the fact that the passengers are all using face masks.”

“So, I may agree with him on that” while adding that, all passengers wearing face masks ‘will limit the transmission of the virus particles.”

He pointed out that “if you want to really prevent transmission, maintaining a distance would help because when the virus is released, it cannot travel a long distance; that’s what informed the idea of within a two-meters distance among each other.

“But inside the aircraft, that will be difficult to observe; so I think that’s why we should all put on our face masks and then they restrict all on-boarding activities.”

Further findings by The ICIR show that Nigerian airline operators who resumed flight operation across the country days ago ensured that air passengers wear their face masks within airport vicinity and onboard aircraft.

This, according to the Captain Ado Sanusi (retired), the Chief Executive Officer of Aero Contractors, was in line with the Nigerian Government’s directives and the World Health Organisation (WHO) travel advice as well as the COVID-19 advisory guidelines of the International Air Transport Association (IATA) and the International Civil Aviation Organization (ICAO).

A document obtained by The ICIR from IATA shows that the risk of catching any infection on an aircraft is typically lower than in any other place, including an hospital, a shopping centre or an office environment.

“We assess that the risk is lower. Compared with those locations, a modern aircraft has its cabin air changed many times more frequently than offices or shops.

“For most modern aircraft types, the air supplied to the passenger cabin is either 100% fresh or is a mixture of fresh and re-circulated air that is filtered through HEPA filters of the same efficacy (99.97% or better) in removing viruses as those used in surgical operating rooms.

“As in a shopping centre or an office, the biggest risk is if someone remains in the environment while unwell with a viral infection. Hence, maintain good personal hygiene is key,” it stated.

Is it, therefore, more hygienic to be in an airplane than to be in an hospital’s theatre room?

“That is not absolutely true,” Dr. Balogun said.

He added: “I guess what the minister is trying to say is that the inside of a cabin without passengers is clean, neat and not risky. The reason for that is because most aircrafts have in the air circulation system what we called the HEPA filters. These HEPA filters remove over 99.9 per cent of any particles suspended.

“But by the time you have the passengers in there, then it can no longer be as clean as he thinks it is. Even while seated in the aircraft, wear your mask and then at regular intervals, have your hand sanitizer with you and use it regularly.”

Also speaking, Professor Omilabu noted that “there is a limit to what the filter can take when you have too many people now releasing air into the cabin. So, the possibility of over tasking the filter can be there.”

He noted that the theatre too is supposed to be sterile. “But there are possibilities of jeopardizing that sterility depending on the procedure going on in the theatre. And you know that patient being operated needs to be protected because they’re exposing his body to pathogens. So, these are two different set up.”

But Embraer maintained that most aircraft exchange their entire volume of cabin air 20 to 30 times more frequently than the air in an office, “and 5 to 6 times more than hospitals,” thus making the cabin more hygienic than a hospital in general.

However, speaking specifically about some hospital areas like the operating theatre, the IATA put forward that the aircraft cabin uses a similar re circulation system as that of an operating theatre.

While speaking about HEPA in planes the IATA stated that “For their production of aircraft with cabin air re-circulation systems, manufacturers have chosen the higher efficiency filters, which are similar to what you would find in a hospital operating theatre”.

From all data obtained, The ICIR is able to confirm that:

Was a baby born holding the mother’s failed IUD?