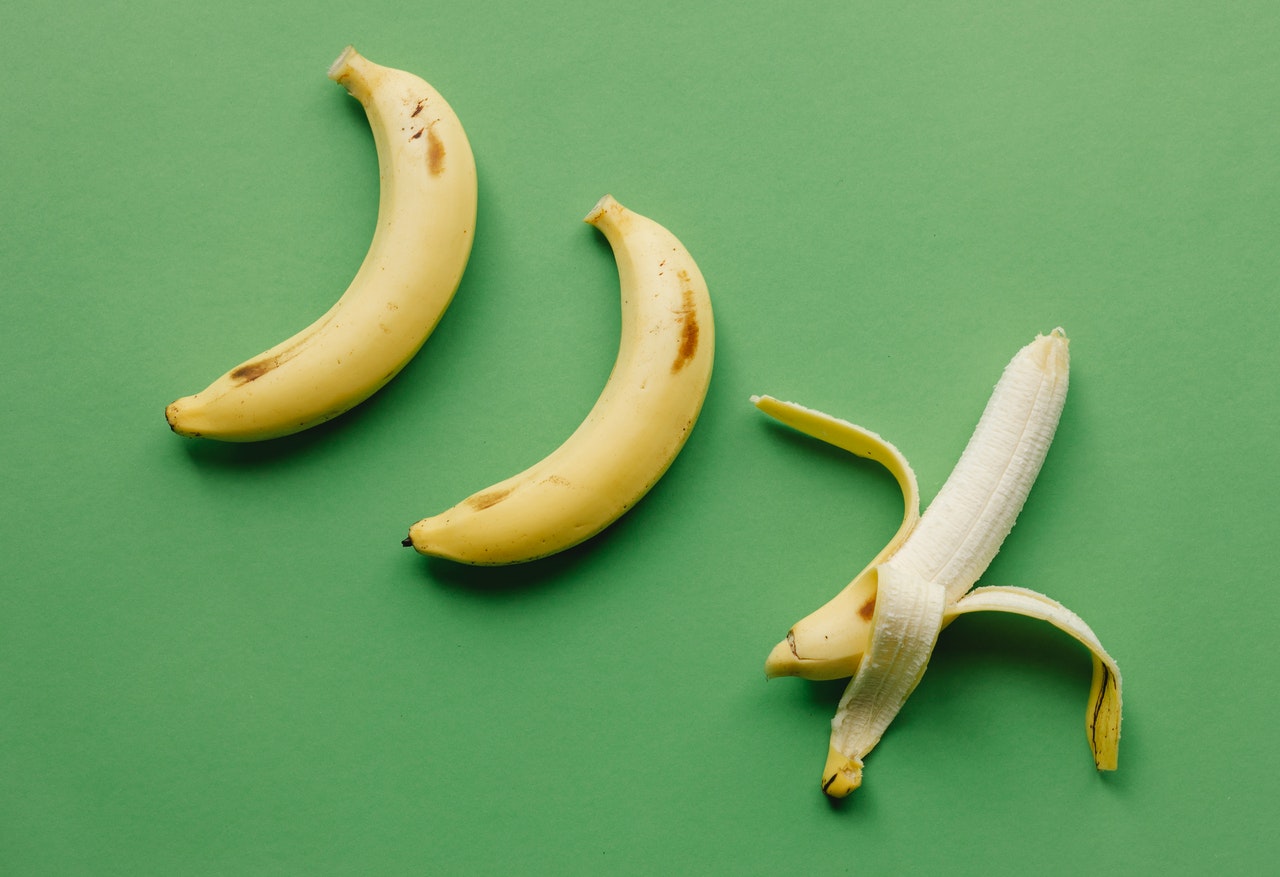 Bananas. Photo by Any Lane from Pexels
Reading Time: 6 minutes

A video has been circulating on multiple WhatsApp groups in Nigeria which claims that eating “a banana a day keeps the coronavirus away.” The video has been found to be doctored with false claims.

The video, which was produced in the form of a news broadcast clip, recommends that eating a banana a day could help prevent humans from being infected with the novel coronavirus (COVID-19).

For over 15 months, the video has been in circulation on various social media platforms, including TikTok, YouTube, Facebook and until recently Twitter and WhatsApp platforms in Nigeria.

The video, which has been forwarded several times on WhatsApp between March 2021 and June 2021, was traced to a March 15, 2020 post on Facebook here using Google Reverse Image Search. It has been viewed over 2,700 times on the Facebook page and now circulates widely on WhatsApp.

It is one of the several videos spreading misinformation about the COVID-19 pandemic, which has claimed over 3.8million deaths with about 176million confirmed cases globally as of June 15, 2021, according to the World Health Organization (WHO). These numbers continue to rise daily.

Since the outbreak of the disease in December 2019, many social media platforms, especially WhatsApp chat groups and Facebook, have become vehicles for spreading misinformation, disinformation and conspiracy theories about the COVID-19.

Users are often asked to forward such messages to as many people as possible.

Some of such viral WhatsApp videos or texts include those claiming that drinking palm oil or hot water, tea several times daily can cure COVID-19, or that mRNA COVID-19 vaccines can reduce lifespan, or that the Nigerian government is giving out COVID-19 survival funds. These, among others, have been debunked by the ICIR’s FactCheckHub.

The claim reads: “Bananas are one of the most popular fruits worldwide. such as Vitamin C. All of these support health. people who follow a high fibre diet have a lower risk of cardiovascular disease. Bananas contain water and fibre, both of which promote regularity and encourage digestive health.

“Research made by scientists from the University of Queensland in Australia have proven that bananas improve your immune system due to the super source of Vitamins B-6 and helps prevent coronavirus. Having a banana a day keeps the coronavirus away.”

The claim has been attributed to researchers from Australia’s University of Queensland, adding that they have discovered that bananas can help prevent COVID-19 infection.

The 58-second video, which shows a news report by the Australian Broadcasting Commission (ABC), with the same banana claim, has been edited severally especially by a TikTok user, @dil_ka_raja2020 and YouTuber to include these texts inscriptions: “Bananas can beat this virus, Must Watch”;  “Banana a day keeps the Coronavirus away.” He has over 12,000 followers with over 167,000 likes on his TikTok page.

Also, an edited 27-second version of the video posted from Pakistan on YouTube on 14th March, 2020 has also been viewed 318 times.

OSINT to the rescue

In verifying this video, this reporter utilised the Open Source Intelligence (OSINT) tools to unravel the spread of this misinformation and authenticate the sources of the visuals put together in making the video.

Using keywords such as banana, COVID-19, this reporter used Hoaxy® to visualise the spread of the information on Twitter, as shown below:

The data show that texts containing the keywords have appeared in 465 tweets between 12th November, 2020 and 26th May, 2021, majorly from a Twitter user, @mb4hope. But the Twitter handle has been suspended and it is unclear why the social media platform has done that.

Similarly, this reporter used the Fake news debunker (image/video verification plugin) by InVID & WeVerify to analyse the visuals’ keyframes and contexts as well as its reverse image search tool to identify the sources of the various clips/images merged together in making the video.

The first footage in the video was truly from an ABC news clip that reported that researchers from Australia’s Queensland University were about to create a vaccine for the COVID-19. It was aired in January 2020.

Following a Google Reverse Image Search of this footage after extracting the keyframes using InVid – one of the OSINT tools – this reporter found the ABC news clip titled: “Race is on as Australian researchers rush to make coronavirus vaccine” on its official YouTube channel.

However, there was nowhere in the three-minute, 39-second ABC News (Australia) video where reference was made to bananas beating or preventing the COVID-19.

The Associated Press (AP) had earlier reached out via email to a University of Queensland spokesperson who confirmed that “the video is fake and said they strongly recommend people do not share it.”

Similarly, a Queensland University scientist Keith Chappell, who discussed the university’s efforts to develop a vaccine against the novel coronavirus in the ABC News video, had also told the AFP that the banana claim video “is definitely NOT true.”

In addition, video footage from the eight- to ten-second of the misleading WhatsApp video was seen on the Shutterstock videos website, using Reverse Image Search – another OSINT tool.

Further findings showed that the footages from the 12- to 23-second of the viral video were extracted from a YouTube clip made by Herbs Cures titled: “Health Benefits of Banana” and uploaded online on March 1, 2020.

Also, the ‘Herbs cures’ logo could be seen in the viral video. The ‘Herbs Cures’ video only listed the benefits of bananas and did not claim that bananas could prevent COVID-19 in the four -minute, thirty-eight second video.

Additional analysis also showed that the footages from the 24- to 31-second of the viral video were extracted from a news video published by the Wall Street Journal (WSJ) in February 2020 titled: “How Scientists Are Trying to Develop a Coronavirus Vaccine.”

The four-minute, seven-second WSJ video did not claim that bananas could beat or prevent COVID-19.

Can any food or fruit prevent one from being infected with COVID-19?

According to WHO, “there is no single food that will prevent you from catching COVID-19,” but bananas have nutritional values.

Although the global health body has a nutrition fact-sheet for healthy diets that protect against malnutrition and non-communicable diseases (NCDs) such as diabetes, heart disease, stroke and cancer, it said there was none that could protect anyone against COVID-19.

Bananas are a fine fruit and garlic is a fine vegetable. But no. There are no clinical trials to suggest they have anti-coronavirus activity. Vitamin-C Is not even a fruit or a vegetable!

Scientists also advised that maintaining good nutritional status could help boost one’s immune system against COVID-19, adding that there was no evidence that any food or supplement would prevent infection or spread of the disease.

“Bananas are a fine fruit and garlic is a fine vegetable. But no. There are no clinical trials to suggest they have anti-coronavirus activity. Vitamin-C Is not even a fruit or a vegetable,” says an infectious diseases expert from the University of Maryland in the United States, Faheem Younus.

However, here are WHO-recommended steps to prevent the spread of the COVID-19.

The claim is FALSE! There is no credible evidence that eating bananas can beat or prevent COVID-19 infection.

The viral WhatsApp video was doctored from two news reports by the ABC News and WSJ respectively, as well as other video footages, to include references to bananas.

This publication was produced as part of IWPR’s Africa Resilience Network (ARN) programme, administered in partnership with the Centre for Information Resilience (CIR), the International Centre for Investigative Reporting (ICIR), and Africa Uncensored. For more information on ARN, please visit the ARN site.

Has CBN authorised the use of cryptocurrency 'like naira'?