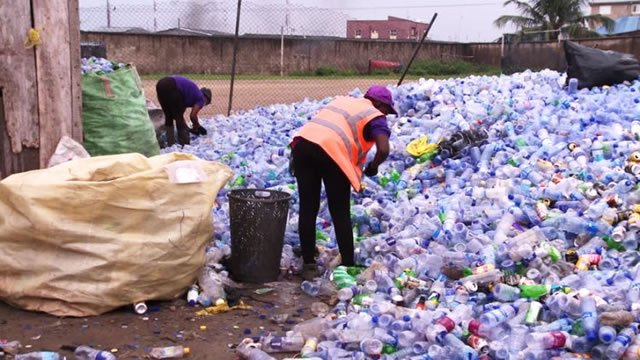 A news story, published by Legit.ng on Wednesday, June 10 claimed that a Nigerian man has invented a machine that could transform nylons and plastics into petrol.

The report, titled: “Brilliant! Nigerian man invents machine that transforms nylons and plastics into petrol (photos),” has garnered about 60,000 views on the website and shared at least 462 times on Facebook with over 400 likes and 129 comments as of Monday, June 15.

The story claimed that Emeka Nelson Ugwueze, a Nigerian invented a machine that could transform nylons and plastics into petrol.

Published on the website with photos embedded, the story read: “A Nigerian man has invented a machine that might develop Nigeria for the better – The man built a machine that transforms waste into petrol, Kerosene and Diesel.

“It was reported that the machine can also transform waste into tiles and roofing sheets.

“Emeka Nelson, a Nigerian from the eastern part of the country, remains celebrated in his own right for being able to create a machine that converts wastes to petrol. The machine does other things and there is hope that Emeka’s innovation will help Nigeria’s struggling economy.

“The young man shared a posting, stating what the list of things the machine can do with photos of the invention on his Facebook page. On the Facebook post, the young Nigerian man reported that the machine transforms hydrocarbon related wastes like plastic, nylon and so on.”

Independent findings by The ICIR confirmed that Mr. Ugwueze actually fabricated the machine and posted it on his Facebook page on October 31, 2018 (about 20 months ago).

Ugwueze in an interview with The ICIR said: “Yeah, it’s true, it can make diesel, petrol, kerosene. A single machine can do all that depending on the design but we found out that the efficiency can be low. So now, we’ve decided to split them so that they (machines) do single thing. For instance, if we want to transform the plastics into pavement blocks or whatever, each one has its own different machine that does that.

“The one that converts plastics to petrol, diesel or whatsoever in that regard is more complex. So, it’s a different machine for that. But technology has made it possible that we can incorporate so many things into one; it’s just like combining two different machines into one.”

When asked if he knew why the platform decided to republish his Facebook post of about two years as fresh report, Ugwueze said: “I don’t know, I don’t know.”

“Whatever they posted there was actually an earlier design. The improved one (machine) we’ve been working on is still doing same thing. But we’re just trying to increase its efficiency,” he said.

Ugwueze added: “at some point, I just talk less and no longer post them (online). They didn’t reach out to me; but what they published wasn’t far from the truth.” He noted that he has improved on the designs published by the platform, adding “but I have kept it personal.”

Further investigation by The ICIR revealed that there are actually incinerating plants or machines that recycle plastics through chemical processes such as gasification and pyrolysis.

She added that gasification involves heating the waste plastic with air or steam, to produce valuable industrial gas mixtures called “synthesis gas”, or syngas. “This can then be used to produce diesel and petrol, or burned directly in boilers to generate electricity.”

“In pyrolysis, plastic waste is heated in the absence of oxygen, which produces mixture of oil similar to crude oil. This can be further refined into transportation fuels,” she opined.

Dr. Anjan Ray, Director, CSIR-Indian Institute of Petroleum, also pointed out that “The fuel obtained from conversion of plastic is completely environmentally friendly due to absence of any toxic substances. Apart from producing petroleum and diesel, this technology will also ensure that urban and semi-urban areas become plastic free, as instead of disposing plastics as waste, they can be converted to fuel.”

“Countries like Japan, Germany and the United States have already implemented the plastic to fuel conversion process with much success. These three also have been successful in creating business models out of the conversion process, resulting in the conversion model becoming a profitable business one,” Saptarshi Dutta also wrote on NDTV.com.

Estimates show that less than 5% of the plastic manufactured each year is recycled, with production of the material set to increase by 3.8% every year until 2030, adding to the 6.3 billion tonnes churned out since production began 60 years ago, according to the National Geographic (NatGeo) channel.

The ICIR reports that the plastics-to-fuel ecosystem if supported could provide major economic benefits to the nation, not only through job creation but also by curbing environmental pollution.

The claim was TRUE, however Legit.ng was re-circulating the Facebook post earlier made about two years ago by Mr. Ugwueze as fresh news. And this is MISLEADING.

Did Adeboye threaten to kill anyone who “mess” with his wife?