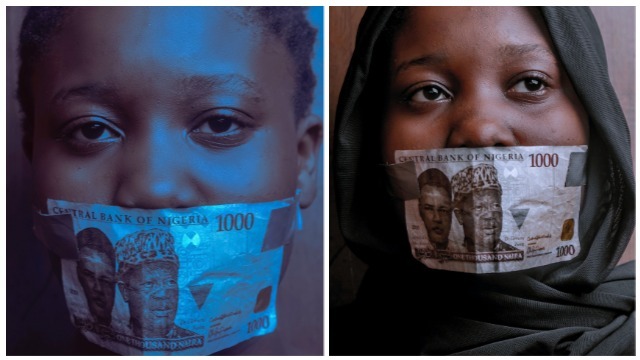 Nigeria’s cyber space is flooded with multiple false claims promising relief funds meant to ease the strain caused by the lockdown necessitated by the coronavirus pandemic. Cloud96 Adedayo via Pexel

The message was forward to the FactCheckHub by a concerned Nigerian for verification.

It reads: “FG has finally approved and have started giving out free N50,000 Relief Funds to each citizen?

The claim also included a website and a caveat that an individual is entitled to it only once.

That FG has finally approved and have started giving out free N50,000 relief funds to each citizen.

The FactCheckHub checked the domain name of the website on the Whois.com to unravel the identity of the person(s) behind it.

Our findings revealed that the main domain name of  ngodataz.com – the website in the claim – was registered on June 15, 2020 in the United States of America (USA).

The website was created amidst the lockdown in Nigeria that halted almost all the nation’s economic activities, following the spread of the COVID-19 pandemic in the country.

It hosted the sub-domain which in a way similar to a survey form used in collecting users’ data.

Clicking on the website takes users to a page that asks users to fill a survey form, after which it asks them to share the webpage at least 8 times, similar to how other spamming websites work.

Thereafter, it asks users to fill-in their bank details such as account number, account name and bank’s name.

Though the website is fortified with the HTTPS (Hyper Text Transfer Protocol Secure), details about its registrant and administrator names and contacts were publicly unavailable as they were protected.

The HTTPS appears in the URL (Uniform Resource Locator) when a website is secured by a Secure Sockets Layer (SSL) certificate.

The details of the certificate, including the issuing authority and the corporate name of the website owner, can be viewed by clicking on the lock symbol on the browser bar.

The FactCheckHub enquired from the Nigerian Presidency to verify if there are any lockdown funds being disbursed to Nigerians via that website.

In response, Segun Adeyemi, the Special Assistant to the Minister of Information, Lai Mohammed, debunked the claim.

“This is fake news,” he stated in a text message to our fact-checker.

Similarly, Garba Shehu, the spokesman to President Muhammadu Buhari, in a text message to the FactCheckHub asked our fact-checker to verify from the Minister of Finance, Zainab Shamsuna Ahmed.

“Can you check with the Minister of Finance, please?” he stated.

When the FactCheckHub contacted Nigeria’s ministry of Finance, Yunusa Tanko, the media aide to the Finance minister, He also discredited the claim and the website, saying “this is not from us, please.”

“Government don’t put out announcements especially of giving out money in such open forum/forms,” he added.

Further checks by the FactCheckHub revealed that the purported N50,000 Relief Funds is not connected with any Nigerian government-led initiatives to cushion the effects of the coronavirus pandemic on her citizens.

The media aide to the minister, Halima Oyelade, debunked the claim that the federal government is giving out free N50,000 to each citizen.

“Not true please,” she replied the FactCheckHub’s enquiry via a text message.

Not the first time…

It will be recalled that similar claims verified by the FactCheckHub previously were found to be false.

A viral post on social media claiming that the Federal Government (FG) of Nigeria is giving out free N25,000 relief funds was earlier debunked by the FactCheckHub in September 2020.

Similarly, a viral WhatsApp message in June 2020 which claimed that the Nigeria Centre for Disease Control (NCDC) is providing monetary palliatives to all Nigerians to cushion the impact of the Coronavirus Disease (COVID-19) was also found to be false.

Why such scams persist and the way forward

Commenting on why such claims are still going viral, Chukwuemeka Fred Agbata Jnr., Co-founder, Tecbuild.africa, said “Scammers have been able to use their victim’s greed and compassion to sway them. Sometimes, the scammers set up in such a way that they offer huge financial profit that appears irresistible in return with no effort.”

He added: “Many of these victims had initially expressed desires to offer a helping hand or likely become a hero.

“The scammers succeed in putting their victims in a position where they would appear to be solving a problem, either by saving an orphan or helping some poor soul recover money that purportedly belongs to them.

“Another way includes preying on the victims’ greediness. They mostly win over those who want to amass wealth too quickly and can easily fall for unrealistic promises.

“In general, lack of orientation is a major cause for victims always falling prey to these schemes. It’s mostly important for people to always do “reality check” for any information and kill greed that makes them fall for unrealistic promises.”

“The reason why most people fall prey is because they don’t take their time to check the website they are directed to before clicking and supplying their personal information. When you land on a page or you receive a link, Stop, Think before you connect,” he said.

When asked how Nigerians can detect online scams to avoid falling victim, Afon stated that the HTTPS on the website alone does not guarantee that the website is not fraudulent.

“Internet users need to be at alert whenever they visit any website especially if there are promises of money e.g. COVID-19 relief package, employment that requires you to pay for form etc.

“It’s important to check the URL which is the address you see on the address bar properly. A government agency will not use .com but rather .gov.ng.

“Also, there might be imitation in terms of legitimate site. So, check out for spelling mistakes. Also, look closely at the content for grammatical errors, spelling mistakes or broken (pidgin) English. You can also find out who owns the website using online website checker such as LookWhois or Whois.net,” he added.

Agbata also tasked online users to identify possible methods cybercriminals employ in defrauding their unsuspecting victims, saying “Scammers try to create a sense of urgency to encourage you to do something quickly without thinking it through or checking that it’s genuine. Don’t rush — take the time to consider and check whether an email (or message) is real. Always verify directly with the sender or (payment) recipient, using known and trusted contact details.”

Both tech experts confirmed that cybersecurity awareness is key in curbing the menace of such online scams.

“There is need for public–private partnership as regards to Cybersecurity awareness. Internet users need to be more conscious when online and treat everything with suspicion. Government and private organisations need to invest more in Cybersecurity,” Afon stated.

From all information gathered from relevant stakeholders and sources, the claim that the FG has approved and started giving out free N50,000 relief funds to each citizen is FALSE.