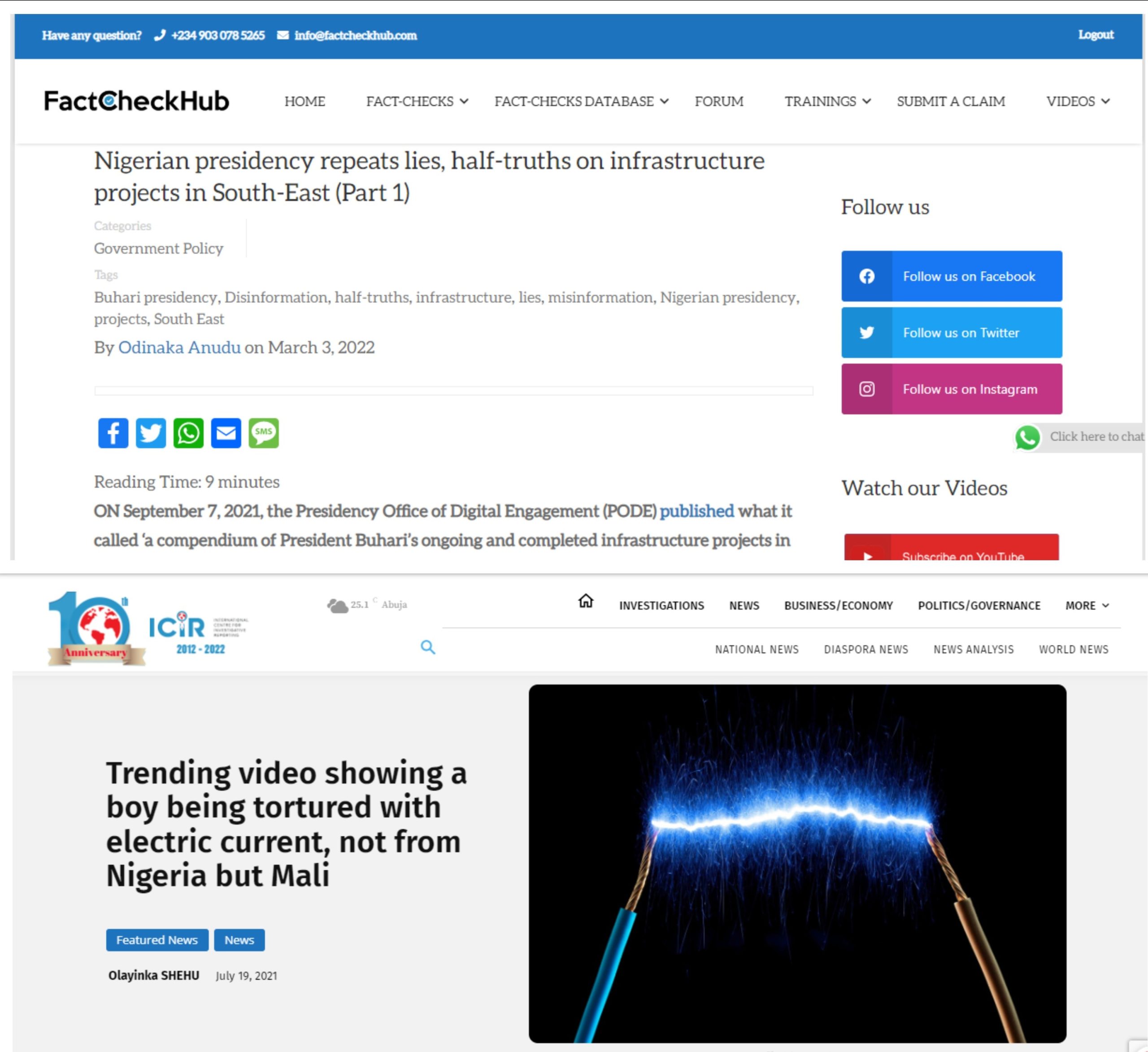 Screenshots of the reports shortlisted for an award at the Global Fact 9 holding in Oslo, Norway.
Reading Time: 2 minutes

TWO fact-checks published by the International Centre for Investigative Reporting (ICIR), have been shortlisted for the Global Fact 9 award in Norway.

The reports were shortlisted under the High Impact Fact-Check category.

Global Fact 9, the only conference dedicated to fact-checking worldwide, organised by the International Fact-Checking Network (IFCN) at the Poynter Institute, USA is currently holding this year’s edition at Oslo Metropolitan University in Oslo, Norway. The conference ends on June 25.

One of the reports, Trending video showing a boy being tortured with electric current, not from Nigeria but Mali, written by Olayinka Shehu, a social media executive and fact-checker at the ICIR was published in July 2021.

The fact-check helped set the record straight about the location of a torture incident that was being said to have taken place in Nigeria. The incident actually happened in Mali.

The video circulated on social media in June 2021, showing a boy tied to a makeshift metal cross by a man who held an exposed electric wire.

This two-part series examined the claims of the (Nigeria’s) Presidency Office of Digital Engagement (PODE) on critical infrastructure projects in South-East Nigeria.

On September 7, 2021, the Presidency Office of Digital Engagement (PODE) published what it called ‘a compendium of President Muhammadu Buhari’s ongoing and completed infrastructure projects in South-East Nigeria.’

The list was released two days before President Buhari’s visit to Imo State, one of the five states in Nigeria’s South-East region.

It was a strategy targeted at convincing the people of the region that the Buhari-led government, which they had accused severally of marginalising them, was committing humongous public resources to building and rehabilitating their decrepit infrastructures.

On-the-ground checks, however, showed that PODE lied on the status of some of the projects and told half-truths on a few others.

Both reports were co-published by the FactCheckHub, the verification platform aimed at combating misinformation in Nigeria and owned by the ICIR.

“The winners will be announced during the networking reception this (Thursday) evening at Kunstnerneshus and will receive $5,000 each as a token of recognition for their remarkable work,” says Baybars Örsek, the IFCN Director.

This year’s Global Fact is organized by the IFCN in partnership with a Norwegian fact-checking organization, Faktisk.no; OsloMET University; the journalism training institute Institutt for Journalistikk and the foundation for investigative journalism, SKUP.

The ICIR is a non-profit media organisation that seeks to promote transparency and accountability through robust investigative reporting.