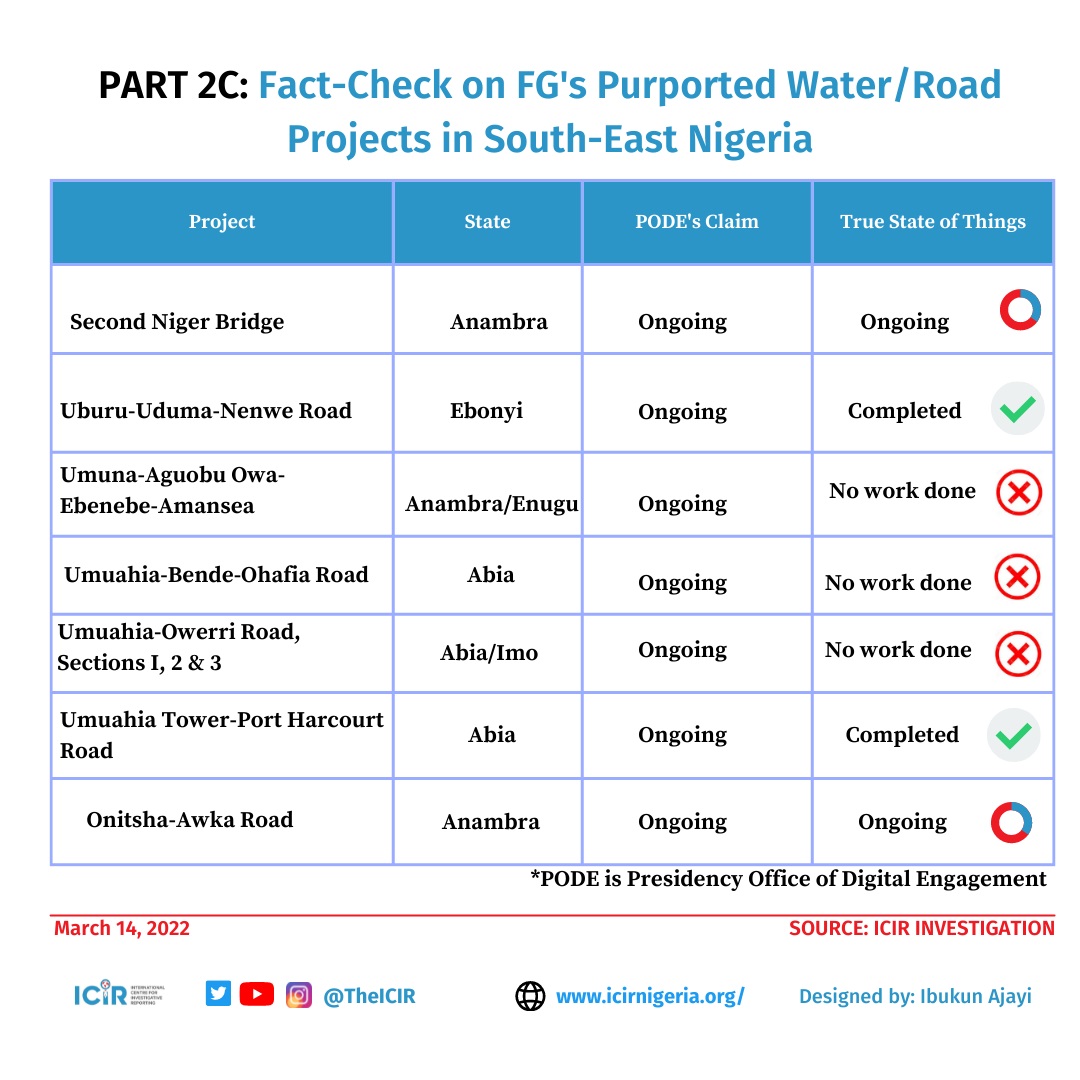 THE second part of this investigation continues to examine the claims of the Presidency Office of Digital Engagement (PODE) on critical infrastructure projects in South-East Nigeria.

ON September 7, 2021, the PODE published what it called ‘a compendium of President Buhari’s ongoing and completed infrastructure projects in South-East Nigeria.’

The list was released two days before Buhari’s visit to Imo State, one of the five states of South-East Nigeria.

You can read the first part of this fact-check here.

The PODE claimed that the Buhari administration was rehabilitating sections 1 and 2 of Abakiliki-Afikpo Road. The FactCheckHub reporter travelled through this road and confirmed that the work was ongoing.

According to information obtained from the website of the Ministry of Works and from online sources, the work is handled by several contractors, including Uniglobe, Builettine, CCEC, and Kemmasphere Realty Company.

Findings showed that work was going on at Abomegga, Abakiliki, Amuzu and Igboruma axes when The FactCheckHub visited the site, but it was found that Afikpo and Amasiobi areas were wearing off.

However, the Ebonyi State government lays claim on the project. In 2017, President Buhari flew into Ebonyi State and commissioned a 14.5 Kilometer Abakaliki-Afikpo Road, which is exactly the project the Federal Government claims to be rehabilitating. In Nigeria, federal roads are handled by the Federal Government while state roads are repaired or built by the state or subnational governments.

It, therefore, means that neither can claim projects done by the other.

The FactCheckHub sent the Freedom of Information (FOI) letter to the Federal Minister of Works and Housing Babatunde Fashola on January 25, 2022, regarding the status of this project and why it was so. Still, he did not reply to questions posed by this organisation more than one month after.

One of the workers on-site, nevertheless, told The FactCheckHub that the project embarked upon by the state government was a smaller part of the contract being executed by the Federal Government.

The PODE also named the rehabilitation of sections 1, 2 and 3 of Owerri-Umuahia Road among the projects executed by the Muhammadu Buhari’s administration in the South-East region. This road connects Umuahia, the capital of Abia State, to Owerri, the Imo State capital, through Ahiazu Mbaise Local Government Area.

According to information on the Federal Ministry of Works’ website, the project is handled by Zerock Construction Nigeria Limited.

The reporter did not see any contractor on-site when he travelled through this road in December 2021. The Umuahia section of the road was tarred, but Ubowo to Ahiara in Ahiazu Mbaise Local Government did not look rehabilitated.

Residents said they saw contractors in 2019 working at Nguru, Aboh Mbaize Local Government Area, but one of them concluded that the company did a shoddy job. The reporter saw several potholes along the Mbaise axis.

“Well, you can see the state of the road now. We need to start taking infrastructure projects seriously in Nigeria if we want to change the poor state of our nation,” Ugo Amanze, a secondary school teacher from Mbaise, said.

The PODE also listed the rehabilitation of Oba-Nnewi-Okigwe Road as one of the activities of the Buhari administration in the region. The road links Okigwe in Imo State from Traffic Light in Nnewi, Anambra State.

The reporter travelled through this road but did not see any contractor or road rehabilitation equipment. Residents, however, testified that a contractor rehabilitated the Nnewi part of the road in 2020.

But there was no evidence that the road was rehabilitated in any way, as potholes dotted the Nnewi North Local Government axis and several other parts of the road.

“It was a poorly executed project,” a resident of Nnewi, Daniel, said.

The Ozubulu portion of this road wore a bad look, and two residents dismissed the question when the reporter asked them whether work was done on that axis by a Federal Government contractor or not.

“You journalists are the problems of this country,” retorted one of them, Anyanwu Josephine, a native of Ozubulu.

“Does it look like a project was done on this road?” she asked, scurrying away.

The PODE cited ‘more than 60 federal road and bridge projects’ being executed in South-East by the Buhari administration. Simple checks showed that the presidential office repeated exactly the claims made by Lai Mohammed in 2018, which were fact-checked here.

All the roads listed by PODE in the new claims had earlier been named in Mohammed’s claims.

The FactCheckHub travelled through all of those roads again to ascertain whether they had been rehabilitated. One of such roads was Olokoro-Alaukwu-Itaja-Okwu-Obuohia-Ikwuano Road, contracted to Abia Rhas in 2010. The contract was awarded at N990.673 million, according to information on the Federal Ministry of Works website.

Findings showed that this project was started and completed by the immediate past government of Goodluck Jonathan. It was not ongoing and was not done by the Buhari government, which makes the claim MISLEADING.

Next was the Olokoro-Isiala-Oboro-Nnono Road Junction Road. This road was awarded to Abia Bok Company at N515.315 million by the immediate past government of Goodluck Jonathan. Residents said it was completed in 2013, meaning that the Buhari administration neither awarded it nor was it ongoing when the reporter visited it. Also, Umuahia-Ahiakwu-Amangwo Road was started and completed by Jonathan, and not Buhari.

“This road was done by the last administration. It was completed around 2014. It has nothing to do with Buhari,” 71-year-old Thadeaus Ohima, who is a native of Umuahia, told The FactCheckHub.

Next is the Umuna-Ndiagu-Agba Umuna-Ebenebe-Amasi Awka Express Road with Spur  from Umuna – Ndiagu.  The Amansea section of this road was supposed to be constructed by Conduc Nigeria Limited, the contractor listed by the Federal Ministry of Works, but this was not the case.

Part of the Ebenebe town was rehabilitated, but work stopped mid-way. The road from Ebenebe to Umuna was abandoned, so it was not ongoing as claimed by PODE.

“We have suffered on this road, but it gets worse during the rainy season. People can tell you anything they want, but the truth is that this road has been abandoned for many years – even before 2015 when Buhari came to power,” Sunday Ede, who hails from Amansea, told The FactCheckHub.

The PODE also referred to Mbaise-Ngwa Road, which connects the Imo River. The reporter saw no contractor when he visited, though the project was listed on the website of the Federal Ministry of Works as being executed by Mangrovetech Nigeria Limited. The FactCheckHub was told by residents that it was completed by the immediate past government of Jonathan.

“It was completed before 2015. Anybody who tells you otherwise is deceiving you,” a passer-by, Okechukwu, who hails from Ngwa, said.

The PODE equally claimed that the Buhari government was rehabilitating the Bende-Arochukwu-Ohafia Road. The FactCheckHub reporter found that work was going on at the site from Ohafia. However, this road is divided into various sections. Contrary to PODE claims that all were being rehabilitated, the Nkporo-Abiriba-Ohafia Road was found to have been executed by Abia State government with evidence hyperlinked here.

The Umuahia-Bende axis, as claimed in PODE’s list, was not ongoing.

In line with PODE’s claim, the Ibinta-Okigwe axis was being constructed when the reporter visited. The only challenge was the quality of the road, residents said. Of equal importance is the Nenwe-Mburumbu-Nara Road, which Arab contractors handle. The reporter found that work was going on as claimed by PODE. However, residents said it had been a ‘start-stop project,’ meaning that construction has been irregular.

“They stopped for two years and started again two weeks ago,” a commercial motorcyclist, Chima Anozie, who is from Nara, told The FactCheckHub.

Another resident, Adaku Nnaji, said she was happy that work had re-started on the site.

She urged the contractor to complete the project before the rainy season of 2022.

The Onitsha-Awka Expressway is also one of the projects claimed to be executed by the Buhari administration. The FactCheckHub found that work was ongoing in December 2021. However, this work had been on for close to 15 years now, meaning that two or three previous governments had been involved in its rehabilitation yet could not complete it.

“I remember it was President Musa Yar’Aadua that awarded it in 2008/2009, but it was not completed until he died,” a resident of Awka, who uses the road, Chinwe, said. She regretted that the road had been used to woo voters from the South-East region during general elections.

“Once election comes, they (politicians) will promise to complete it, but they forget their promise after the votes are cast,” she further said.

“This place has been like this for over 10 years now, no work, nothing,” said Adanna Ihuoma, a native of Amansea, who used a stream of expletives on the Federal Government for ‘abandoning the road.’

She berated the reporter for “not telling the government the truth” even though she was told that the journalist was on a fact-finding mission.

Similarly, PODE claimed that the Second Niger Bridge was ongoing. The claim was found to be TRUE.

More so, Aba-Ikot Ekpene Road claimed to be rehabilitated by Buhari has the signature of the Abia State government. Due to its deplorable state, the Abia State government, in October 2021, “directed the immediate fixing of the deplorable state of the Umuahia- Ikot Ekpene federal road, which has become a death trap.” This was one month after PODE’s claims.

Some of the projects listed by PODE were discovered to have been initiated and completed by Buhari’s government.

Similarly, Onitsha-Owerri Road has been rehabilitated as claimed by PODE, including the Okija-Oguta section. This is also the same for Ekwulobia-Oko Road in Anambra State and Uburu Nenwe Road in Ebonyi State.

The PODE claimed that the projects were either ongoing or completed. But out of the 27 projects investigated, only five were completed by President Buhari. Six were ongoing, while two were done by the Abia State government. Three were partially done. No work was recorded on six projects. However, four projects were completed by Goodluck Jonathan, and one was suspended. This means that only 15 out of the 27 projects recorded some form of execution by the Federal Government.

Was LASTMA official caught with PoS machine in Lagos? 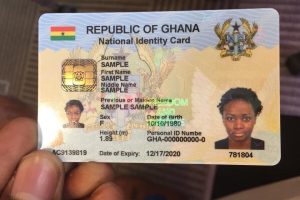