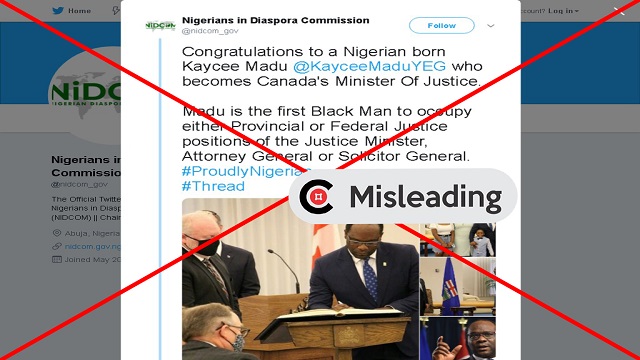 A screenshot of the misleading tweet by NIDCOM.
Reading Time: 2 minutes

A tweet by the Nigerians in Diaspora Commission (NIDCOM) via its official Twitter handle: @nidcom_gov had on August 26 referred to the Nigerian-born Kaycee Madu as Canada’s Minister of Justice.

That Nigerian-born, Kaycee Madu, has been appointed as Canada’s Minister of Justice.

Checks by the FactCheckHub revealed that as at Thursday, August 27, 2020, David Lametti is still the Minister of Justice and Attorney General of Canada.

Parts of Lametti’s profile, as stated on the official website of the Department of Justice of the Canadian government, reads “…Minister Lametti served as a parliamentary secretary from 2015 until 2019, when he was appointed Minister of Justice and Attorney General of Canada.”

Similarly, a check carried out by the FactCheckHub shows Lametti’s name and profile among the current cabinet member of Justin Trudeau, the Canadian Prime Minister.

Further findings by the FactCheckHub indicated that Kaycee Madu was appointed Alberta’s Minister of Justice and Solicitor General, a province in Canada – contrary to the claim by the NIDCOM’s tweet and Vanguard’s report.

According to the official Canadian government’s website, Canada is currently made up of ten provinces and three territories.

Also, a congratulatory tweet from Doug Downey, a Parliamentarian for Barrie—Springwater—Oro-Medonte, and Attorney General of Ontario (Canada), via his Twitter handle: @douglasdowney, referred to Madu as “Alberta’s new Minister of Justice and Solicitor General.

Madu’s profile has been updated on the website of the Alberta’s provincial government as its minister of Justice and Solicitor General.

The FactCheckHub also reports that several Nigerian media including The Guardian (Nigeria), The Cable and Premium Times reported Madu’s appointment as Alberta’s new Minister of Justice and Solicitor General.

From all information available, NIDCOM’s tweet and Vanguard’s news reports are MISLEADING.

*This report was updated on 28/08/2020 with the second to last paragraph before the verdict.

Is Nigeria safer than five years ago as claimed by its Army Chief?

Did Sale Mamman raise $1.6billion for TREP within one year as Nigeria's Minister of Power?