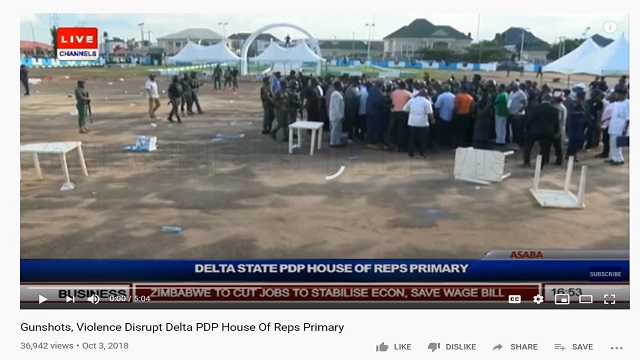 Different variations of a video which went viral on Saturday, October 10, 2020 claimed that violence has erupted at a polling unit in Ondo state and that the wife of the state governor, Betty Akeredolu, was injured.

The video is alleged to have been aired by Channels Television, a  national television station in Nigeria.

Some of the captions accompanying the video alleged that the governor of Ondo state, Rotimi Akeredolu, sponsored the attack when he sensed that he was losing the election at a polling unit: “Governor @RotimiAkeredolu sensed that he was losing in his own polling unit, then he ordered his police men to scatter the place!! 3 people have died on the spot!!! Everybody should pay attention to Ondo!!!”

The Independent National Electoral Commission (INEC), Nigeria’s electoral umpire, on Saturday, October 10, 2020 conducts the Ondo State Governorship election. The race to elect a new governor for Ondo is ongoing as at press time. Ondo is a state in Western Nigeria.

Akeredolu is contesting  for a second term under the All Progressives Congress (APC) platform. While other front runners  are Eyitayo Jegede of  People’s Democratic Party (PDP) and Agboola Ajayi of the Zenith Labour Party (ZLP). Agboola is the current deputy governor of the state.

The APC is the ruling party at the nation’s centre.

Checks by the FactCheckHub revealed that the video is MISLEADING as it has been doctored. The event in the video is not part of the 2020 Ondo state election coverage.

The difference in location on the same video content said to have been broadcasted LIVE is a red flag that indicated that the video have been doctored.

What is the story behind the video?

Channels Television has reacted to the viral video and labelled it as “Fake News”.

The TV station tweeted that the video is doctored and it is not part of its coverage of the Ondo 2020 Governorship Election.

They further stated that the original video happened a few years ago and provided a link to it .

“The events playing out in the video is from an incident in Delta State two years ago”, the tweet reads.

The accompanied link leads to a video uploaded on Youtube on October 3, 2018. The video is titled “Gunshots, Violence Disrupt Delta PDP House Of Reps Primary”.  Asaba is the location written on the original video at the bottom’s right hand corner.

This means that the video that resurfaced online is two years old and as such could not have been an event that happened at a poling unit in Ondo in October 2020.

A look at the various videos in circulation  shows people within a blue and white fenced location.

In addition, there are several white canopies. However, two canopies standing side by side with what appears to be a human figure standing on top of one can be seen in all the videos in circulation.  Also, the canopies are beside an arched-doorless door painted white.

FAKE NEWS: The video below is doctored and is not part of Channels Television's coverage of the Ondo 2020 Governorship Election.

The events playing out in the video is from an incident in Delta State two years ago.

Since the video did not emanate from Ondo state,  it can be deduced that Betty, Akeredolu wife was not injured. And perhaps she was injured, it was not at the event portrayed in the video.

Furthermore, Betty Akeredolu has debunked the claim that she was injured at a polling unit as put forward by one of the posters of the video.

In a report by the Nation newspaper, she said the video was meant to damage the voting exercise, distort information and put it in a bad light.

Speaking at her Owo residence in Ondo state, she said, “That is insane, that is absurd. That tells you how desperate people can be in politics or our political landscape.

“I am here in the ambience of my country home and somebody is there doctoring video that I was injured.

“Were you the one that injured me? Such desperation will not do any good to them.

“The detractors want to damage the exercise, to distort information and put one on a bad light. It is all false,” the report reads in part.

Why misinformation abounds in the time of elections

This will not be the first time that a content will be manipulated and attributed to Channels Television.

In September 2020 during the Edo State Governorship election, the FactCheckHub checked a claim here that put forward that Channels Television has released the result of the governorship debate which was false.

In addition, the FactCheckHub had to debunk numerous viral misinformation that were in circulation; that  Ize-Iyamu begged Obaseki to return to APC or that  Ize-Iyamu congratulated his opponent’s party; that Oshiomhole voted for PDP , that a candidate withdrew from the election.

A multimedia journalist and social media strategist, Alade Abiodun, had explained to the  FactCheckHub that elections bring about the proliferation of misinformation.

He said misleading information are in circulation because “It is the season of election.”

Alade further explained that “Politicians, their supporters and apologists will want to woo voters by selling their preferred candidates, not minding if they make use of misleading information to achieve this”.

He added: “Some are deliberate, others are done out of mischief with the sole aim of scoring political gains.”

The claim that Akeredolu’s wife – Betty –  was injured in the election violence portrayed in the video is FALSE. Furthermore, the claim that the video shows a polling unit in Ondo state where violence erupted is MISLEADING because the incident depicted happened in 2018 in Delta state.

Claim that Agboola Ajayi, ZLP candidate for Ondo governorship poll withdrew from the race is FALSE

How to fact-check images online