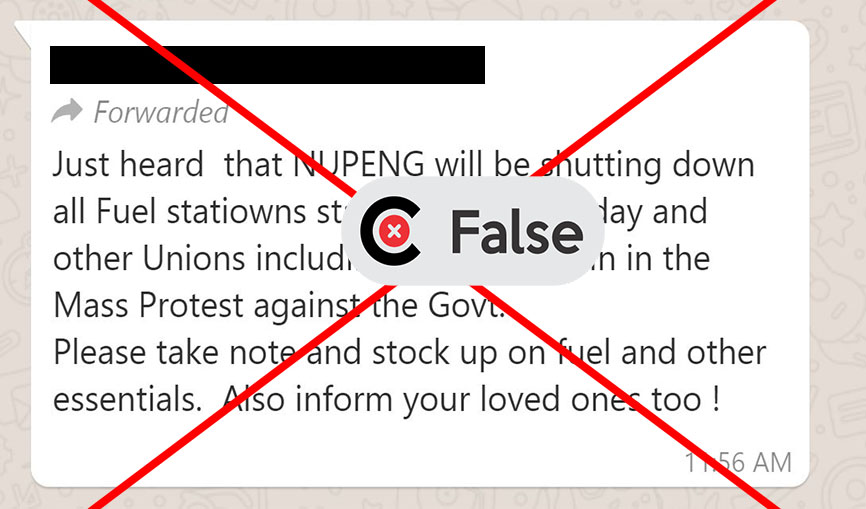 A screenshot of the claim as seen in a WhatsApp group.
Reading Time: 2 minutes

Multiple Twitter and WhatsApp posts shared numerous times between September 5 and 6, 2020, claim that the Nigeria Union of Petroleum and Natural Gas Workers (NUPENG) will be shutting down fuel stations starting from Monday, September 7 across the country.

It added that other unions including shops will join in the mass protest against the government.

It went on to ask the public to “take note and stock up on fuel and other essentials”.

Charley boy in the past had led several protests and rallies under the ‘Our mumu don do’ platform.

Nigerian actress, Kate Henshaw,  also tweeted  the same post; she, however, was seeking confirmation if the post was accurate.

That NUPENG will shut down all fuel stations starting from Monday.

This claim is coming on the heels of the increase in pump price of Premium Motor Spirit (PMS) also known as petrol or ‘fuel’. The  Nigerian Government had announced the price increase  from N149 per litre to N151.56. But media reports however indicated that it is selling for as high as N161 at some fuel stations.  The government made the announcement on Wednesday, September 2 but by Saturday (September 5), the claim on NUPENG’s planned action has flooded the social media.

The claim did not specify where the action will take place,  but the use of “all fuel stations” connotes the whole country.

The FactCheckHub reached out to NUPENG on the viral post and the union’s Principal Assistant General Secretary for Public Affairs, Adamson Momoh, debunked the authenticity of the claim.

“We only have an action in Rivers state starting from Monday. And Rivers is just one state out of  the 36 states, so it is fake news,” Momoh said in a phone interview with the FactCheckHub.

The Nigeria Labour Congress (NLC) and several of its affiliate associations and unions –  of which NUPENG is part of –  have a planned  action slated to hold on Monday, September 7, 2020 in Rivers state, according to media report.

The action is directed at Rivers state government. The unions  would visit Port-Harcourt, the state capital to protest against alleged clampdown on labour activities by the Governor, Nyesom Wike, the Guardian newspaper also reports.

In addition, the President of NLC, Ayuba Wabba  listed non-payment of outstanding salary arrears as part of the reasons for the proposed action.

From the information presented above, the claim that NUPENG will be shutting down all fuel stations starting from Monday is FALSE.

Report that Nigeria plans to power 5 million homes with N2.3 trillion is MISLEADING