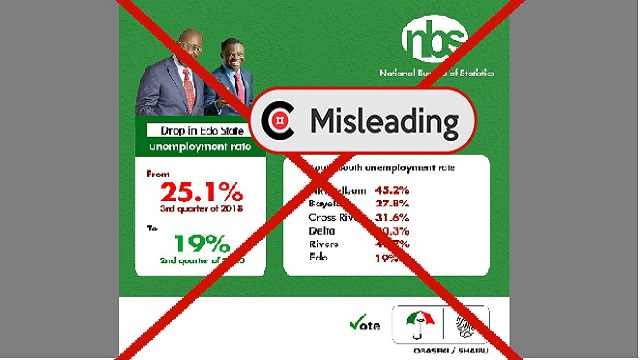 Edo, a state in Southern Nigeria is set to hold its gubernatorial election on September 19, 2020. As the election holds on Saturday, misleading images flood the internet.

One of such images has the logo of the National Bureau of Statistics (NBS) displayed at a prominent position while showing the picture of a candidate and his deputy.

The image also have unemployment rate for other South-South states.

That the National Bureau of Statistics (NBS) designed the infograph with a political party logo showing the unemployment rate for Edo state for the third quarter of 2018 and second quarter of 2019.

Edo state is one of the states that hold off-season elections in the country. The Gubernatorial election in the state does not follow the timetable for the country’s general election.

One of the front-line contenders among the candidates for the Edo 2020 election is Godwin Obaseki, a former member of the All Progressives Congress (APC), who is also the incumbent governor of the state. He is now the candidate of the Peoples Democratic Party (PDP) for the election. Obaseki became governor in 2016 through the APC platform.

The NBS is the national body saddled with the responsibility of coordinating, researching and producing official statistics for Nigeria. In carrying out its duty, it is expected to be non-partisan. Therefore, having the PDP logo on an infograph being circulated days to an election in Edo state was a red flag.

Another red flag is the incomplete data on the poster; as the South-South  states’ unemployment rates were stated without specifying the year and the quarter.

Furthermore, when The FactCheckHub contacted the NBS information desk, they said the infograph did not emanate from them.

“We cannot do a poster like this,” says Sunday J. Ichedi, the Head, Public Affairs & International Relations Unit of the NBS in a phone interview.

Also, in response to the image sent to his WhatsApp, Ichedi said “The correct thing should  have been source: National Bureau of Statistics. Though the data [Edo unemployment rate] is correct but the design is not from NBS”.

Similarly, a different misleading image in relation to the Edo election also went viral following the Edo election debate which took place on Sunday, September 13, 2020.  The image shows the result of a poll and attributed it, in similar fashion with the aforemention, to Channels Television.

Although Channels TV did run a poll on “Who won Sunday’s Edo Governorship Debate?”  between Obaseki and Ize-Iyamu, the infograph attributed to them was in circulation even before TV’s online poll had closed.

In response to this, the TV station via it Twitter issued  a disclaimer  which reads “Channels Television has no link with these graphics and the content contained in them. To vote in the Channels TV poll which went up after today’s debate and will run till tomorrow”.

A multimedia journalist and social media strategist, Alade Abiodun, told the FactCheckHub that elections bring about the proliferation of misinformation.

He said misleading images are in circulation because “It is the season of election.”

Alade explained that “Politicians, their supporters and apologists will want to woo voters by selling their preferred candidates, not minding if they make use of misleading information to achieve this”.

He further stated that “Some are deliberate, others are done out of mischief with the sole aim of scoring political gains.”

Although the unemployment rate in Edo’s third quarter in 2018 is 25.1 per cent and second quarter of 2019 is  19 per cent, the infograph did not emanate from the National Bureau of Statistics (NBS); therefore, attributing the claim to the institution is MISLEADING.