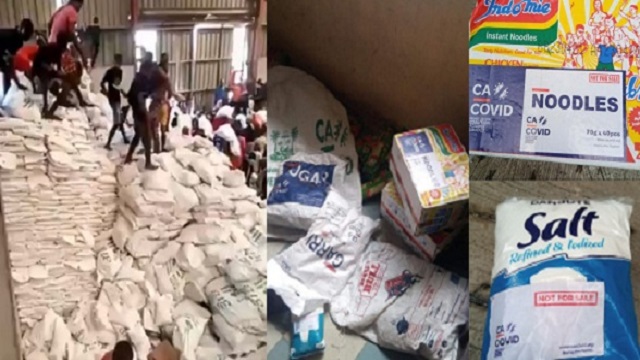 Screenshot of the food palliatives, retrieved from www.thedabigal.com.ng on October 23, 2020.
Reading Time: 6 minutes

On October 22, 2020, visuals flooded the internet of people carrying food items from a warehouse in Lagos, Nigeria marked with “Not For sale” and “CACOVID-19”.

The visuals were generally accompanied with captions alluding that the palliatives were meant to be distributed to the poor and indigent people during the lockdown period following the COVID-19 pandemic outbreak in Nigeria  but were cornered and hoarded by an or some individual(s).

A Twitter user @Piousbae012 wrote “COVID- 19 palliative meant for struggling Nigerians as relief during lockdown found locked away in a warehouse. The world has to see this”

Another Twitter user,  @2muchAkanni wrote “People were dying of hunger, nobody could go anywhere during the Covid-19 lockdown and someone locked that palliative in his/her warehouse.”

Also, another Twitter user @EndSarsAisha wrote “My people see rice, indomie and other Covid-19 palliative hidden in a warehouse in Lagos”. The 12 seconds video posted by this user, alongside the texts above, had over 3 million views, over 10,000 retweets and likes as at 8:30pm on Friday, October 23.

That food palliatives meant for distribution during the COVID-19 lockdown period was hoarded by an individual or a group of persons.

Findings by the FactCheckHub shows that the claim is FALSE.

Media reports indicate that a warehouse where COVID-19 palliatives were kept at Mazamaza community in Amuwo Odofin Local Government area of Lagos State was attacked on Thursday, October 22, 2020 while the food items stored inside were carted away.

The warehouse is located at a place popularly called Monkey Village, the reports noted.

“The looting started as early as 08:00am”, an eyewitness told the Punch Newspaper.

Some of the people who reportedly took these food items also shared visuals of the items in their homes.

The food items were branded with CACOVID stickers.

The Coalition Against COVID-19 (CACOVID) is a private sector-led organisation established in March 2020 to assist the Nigerian government in combating the Coronavirus disease in the country.

“This task force is tasked with pulling resources across industries to provide technical and operational support while providing funding and building advocacy through aggressive awareness drives,” its website stated.

The goal is to raise N120 billion, of which 35 per cent has been met, the fundraising thermometer on the website indicates. The list of donors can be seen here.

The CACOVID initiative is spearheaded by Aliko Dangote, Herbert Wigwe and other private sector leaders alongside the Nigerian government.

The initiative has a Food relief programme and has distributed such to Kogi, Anambra, Edo, Ogun and Sokoto states, among others. These food items were kept in warehouses before distribution to the beneficiaries.

The Lagos State Government has condemned the vandalisation of the warehouse at Mazamaza housing the food palliative packages donated to the  government by the Private Sector Coalition against COVID-19 (CACOVID) group.@jidesanwoolu @lagosagric1 @Abi_Olusanya#ForAGreaterLagos pic.twitter.com/x8ZSkQQJNF

The Lagos State Government through its Acting Commissioner of Agriculture, Abisola Olusanya, said the food items that were looted by people was donated to the state by the CACOVID initiative.

Olusanya noted that “The State Governor, Mr. Babajide Sanwo-Olu, had on September 22nd 2020 formally taken receipt of the food palliatives from the CACOVID team meant for distribution to the indigent.”

She explained that “the warehouse in question is not State-owned and its usage was made available to the CACOVID group. The State Government had been allowed to commence re-bagging of food items allotted to it from the quantities meant for South-West States.

“The re-bagging was being done to account for each beneficiary receipt, as was required.

“The distribution was on-going but had to be halted due to protests, before the invasion of the warehouse today,” Olusanya explains.

The statements put forward that:

Attempts to contact the CACOVID team via the mobile number on its website as well as its Twitter and Instagram handles were not successful as its mobile line was switched off while its social media accounts were not open for Direct Messaging (DM) respectively.

A check through the Instagram page of CACOVID shows that the distribution of palliatives is not limited to the lockdown period which was relaxed in May 2020.

A video on the page shows  a flag-off of the initiative’s food relief programme in Sokoto state. The first speaker said in the video said they are “continuing the third phase”  – which implies that the initiative has several phases.

Similarly, the Plateau state Governor, Simon Lalong as at September 18  said, “We are still expecting rice consignment from the CACOVID donation which will be distributed to the beneficiaries.”

Media reports also noted that Imo state received and distributed the food palliatives from CACOVID in June, July and September 2020.

Videos of the food relief flag-off in Edo and Nasarawa states among others – all had visuals of food items in large warehouses similar to the one vandalised in Lagos.

As such, it is not unlikely that the food items in the vandalised warehouse came after the lockdown period.

In addition, a report by the Business Day news platform, published on September 23, states that the Lagos State Government received food items from the CACOVID initiative noting that the food items will be repackaged to ensure that each beneficiary gets the right quantity of items.

A similar report was also published by Daily Trust Newspaper  on September 25.

Reports from Thisday, Guardian, Alimosho Today indicate that Lagos had commenced distribution of the palliatives as stated.

“The distribution team was led by the Secretary to the State Government (SSG), Folashade Jaji.

These information corroborate the claims made by the Lagos State Government.

How Sadiya Farouq and the Federal Ministry of Humanitarian affairs, Disaster Management and Social Development came into the conversation

It means Sadiya Umar Farouq actually gave those palliatives to our states representatives & they hoard them for 2023. This is total Wickedness & greed. Please, can we just go burst other hoarded palliatives?

A Twitter user @Prof_aboki  wrote: “It means Sadiya Umar Farouq actually gave those palliatives to our states representatives and they hoard them for 2023. This is total wickedness and greed. Please, can we just go burst other hoarded palliatives?”

Another user,  @AdekunbiOyelade, whose post has garnered over three million views wrote: “I have never seen anything like this. Okay. I didn’t agree Sadiya Umar Farouq shared any palliatives, but this looks like a warehouse was the sole beneficiary. #warehousegate”

So also @Ameer_Abdul1, wrote: “On a lighter note, Lagos people now know that neither the President Muhammadu Buhari nor the Minister for humanitarian affairs, Mrs Sadiya Umar Farouq were responsible for denying them Covid-19 palliatives. Citizens of other States now know who to blame.”

Comments like the three above flooded the internet at the wake of the viral visuals of  vandalised warehouse.

This is probably because there are discontentment in some quarters following the distribution of palliatives during the lockdown period by the Federal Ministry of Humanitarian affairs, Disaster management and Social development (FMHDS) headed by Sadiya Farouq.

In addition, the ministry has been in the news for an alleged diversion of over two billion Naira meant for palliatives. This was however, refuted by the ministry.

Therefore, the people who had felt the ministry did not distribute palliatives now put forward that the alleged hoarding explains why the items did not get to the masses in the country.

Contrary to the above, the food items in the warehouse were not from the humanitarian ministry, neither were they in-charge of the distribution.

The ministry, in a report disassociating itself from it, stated that it “wishes to inform the general public that it has nothing to do with the items found in that Lagos warehouse.”

The claim is FALSE as available evidence did not indicate that the food palliatives were hoarded by an individual or a group of persons. Available information shows that the food items were geared as a COVID-19 palliative and not restricted to the lockdown period, neither were the items stored in the warehouse for months as claimed by some social media users.