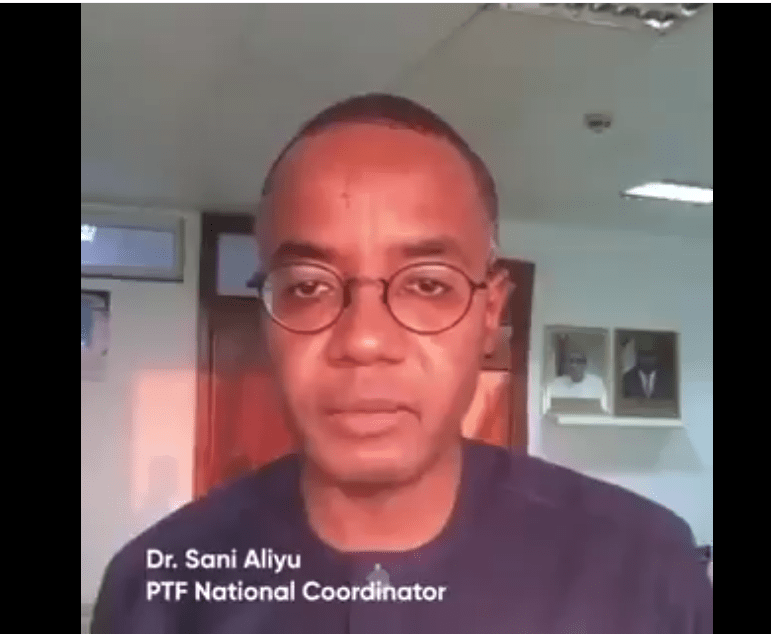 A screenshot of Sani Aliyu from the video.
Reading Time: 3 minutes

Less than 24 hours after the announcement of COVID-19 restrictions across the country by the Nigerian Government, a video of  a former National Coordinator of the Presidential Task Force (PTF) on COVID-19, Sani Aliyu, telling the public to ignore lockdown rumours surfaced online.

The video which was also shared on Facebook here has a comment: ‘Thanks for sharing, sir’ connotating the commenter felt it was a piece of timely and useful information.

Multiple persons have also contacted the FactCheckHub to verify the video which has gone viral especially on the WhatsApp platform since the government’s announcement on May 10, 2021.

The video shows a PTF National Coordinator, Sani Aliyu, telling Nigerians to ignore the lockdown as it is fake news.

Findings by the FactCheckHub show that it is an old video that resurfaced online, therefore it is MISLEADING.

In the 51 seconds video, Aliyu said “We are aware of the fake message that is going round on WhatsApp that we’ve declared a lockdown in the country. This is absolutely not true. I am calling on the general public to please ignore this message.”

This video has been online since January 2021. It was posted here on January 15, on the same date, multiple media reports referenced Aliyu’s message.

Aliyu had made the video following messages shared on social media that the Nigerian government had declared another lockdown due to the COVID-19 spike in the country at the time.

In addition, the FactCheckhub reached out to Aliyu who also debunked the the claim.

“Of course it is not true. It is an old video from January when we had to tackle rumours of a new lockdown”, the doctor said via a text message.

He added that the video talks about a WhatsApp message and has nothing to do with the recent announcement.

Furthermore, Aliyu clarified that the PTF has now transitioned to Presidential Steering Committee (PSC), while noting that he is no longer the coordinator neither does he at the moment work for the Nigeria government. He has resumed a consultancy position at a university in another country.

Aliyu stepped down as the PTF National Coordinator in March 2021.

On May 10, 2021, the Nigerian government announced restrictions across the country. This new directive is to take effect by midnight of May 11, a member of the Presidential Steering Committee (PSC) on COVID-19, Mukhtar Mohammed told the press.

The PSC directive is in light of the rising trend in several countries and the high risk of a surge in COVID-19 cases in Africa.

Although Nigeria has begun its vaccine roll-out, there is a shortage in global supply which translates to a delay in vaccinating a large proportion of the population.

Therefore, non-adherence to COVID-19 prevention protocols could lead to a large outbreak.

The restrictions put in place is largely due to the poor compliance to public health and social measures contained in the COVID-19 health protection regulations, specifically, on the use of facemasks, physical distancing, temperature checks in public places, hand washing and limitations placed on large gatherings, the PSC noted.

“In line with the increasing risk of a surge in cases, the PSC is re-instituting the enforcement of the COVID-19 Health Protection Regulations. This is to mitigate the risk of a spike in new cases, while the nationwide vaccine rollout continues”, this was noted in the implementation guideline for the current phased restriction of movement.

The video in circulation is an old video; it has been online since January 2021. Thus, it is MISLEADING.

Edit Note: The report was edited on May 11, 2021 to reflect the Sani Aliyu’s response.