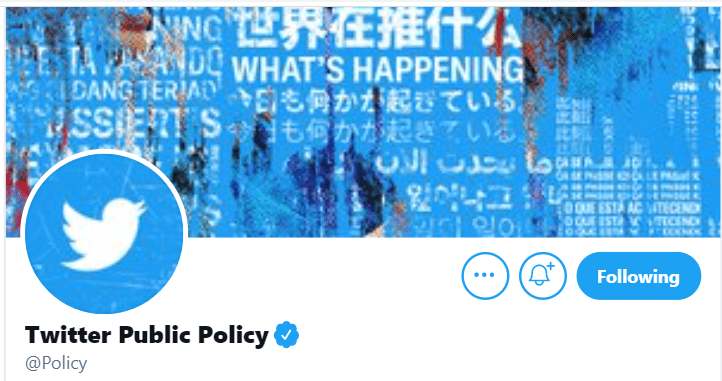 A photo of a tweet stating that Twitter has promised to respect the laws and sovereignty of Nigeria circulated on social media was alleged to have originated from the verified public policy account of the micro blogging platform.

This image was circulated amidst a ban placed on Twitter in Nigeria by its president, Muhammadu Buhari.

Findings by the FactCheckHub showed that the photo is a manipulated image and therefore false.

The photo shared on WhatsApp was also posted on Twitter by a user with name and handle Fulani son, @NigeriaFirst11 respectively.

A reverse image search done by the FactCheckHub also showed that the image was posted on Nairaland forum, however multiple users on the platform have commented that it is a ‘fake’.

“We’re committed to peace, progress and freedom of speech of the Nigerian people. We have reviewed our actions and are in communication with the Nigerian Government and promise to respect the laws and sovereignty of Nigeria #KeepItOn”.

The Factcheckhub recently debunked a claim where a manipulated image was used to falsely say Facebook CEO Mark Zuckerberg tweeted that the Nigeria president Buhari cannot think properly and may need medical attention.

Twitter CEO Jack Dorsey at a tech hub in Lagos when he visited Nigeria in 2019. Photo: Jack Dorsey.

Secondly, the icon that comes up whenever the hashtag #KeepItOn is used is also missing.

As at 1:15pm of June 7, the FactCheckHub checked and the icon has not been deactivated by Twitter, which means it is still functional.

The last post with regards to Nigeria Twitter ban was made on June 5, 2021 which stated they were concerned by the blocking of Twitter in Nigeria and access to Open internet is essential human right in a modern society.

Even though signs like the removing of #EndSARS logo, deleting of some of the separatist leader Nnamdi Kanu tweet and a press release from government which had a milder tone indicate that the Nigerian Government and Twitter maybe having conversation, the above tweet is not from Twitter as purported.

Is Nigeria the only country in Africa where Twitter is restricted?