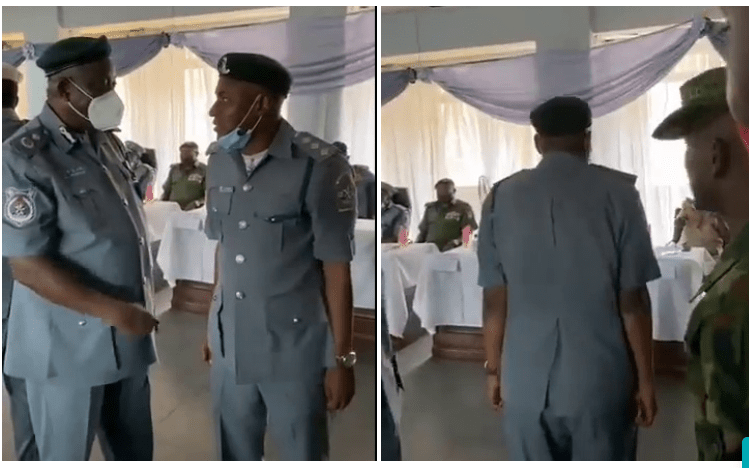 A screenshot from the viral video of the Customs officer.
Reading Time: 3 minutes

MULTIPLE posts on social media claim that a bandit has been recruited into the Nigeria Customs Service (NCS).

The posts have a photo collage made-up of a screenshot of a Customs officer and that of a bandit which was taken alongside the governor of Katsina state, Bello Masari.

One of the post made on Facebook reads; “From bandit to Customs, no interview, nothing just express terrorist government”.

Another on Twitter  archived here reads; “Can you imagine? From bandit to Customs officer”.

The tweet made by Odinakabiafra with the handle @odinakabiafra2 has received over 2000 engagements with more than half of it on retweets.

The bandit was recruited into the Nigeria Customs Service (NCS).

Nigeria has been plagued by banditry on one side and the Boko Haram insurgency on another.

In a bid to solve the menace,  government at various levels deployed different tactics which include peace negotiations with bandits and deradicalisation scheme which seeks to reintegrate Boko haram defectors into the society through Operation safe corridor programme.

These tactics, have been met with resistance from some quarters, who say the bandits or insurgents now christened ‘Repentant Boko haram’ or ‘Repentant Bandits’ are getting a bargain at the expense of law abiding citizens.

The claim making round is birthed from this atmosphere.

Findings show that the bandit in the picture with Masari, the governor of Katsina is known as ‘Buharin Daji’ who was a kingpin within Zamfara and Katsina states until his death.

The picture was taken during one of the numerous peace and reconciliation negotiations.

The second image was a screenshot from a viral video, which shows a disoriented customs officers in what appears to be a formal setting made up of different security agencies.

The officer appears to not know the procedure of when to salute, go for a handshake or whom to salute.  This generated comments on social media that a “novice” was recruited without going through any formal training.

The  NCS has however debunked the allegation that he was a bandit and or that he is a novice. In a statement, the Customs Public Relations Officer, Joseph Attah, said “for the avoidance of doubt, the Officer in question was recruited through a rigorous process and trained in 2011 and has just grown to the rank of Deputy Superintendent of Customs, (3 stars)”.

Furthermore, the FactCheckHub  enhanced and compared the faces from the two images and observed that their facial features like nose, eyes, ears and forehead are different.

The claim that Customs officer in the video is the same person as the bandit is FALSE.