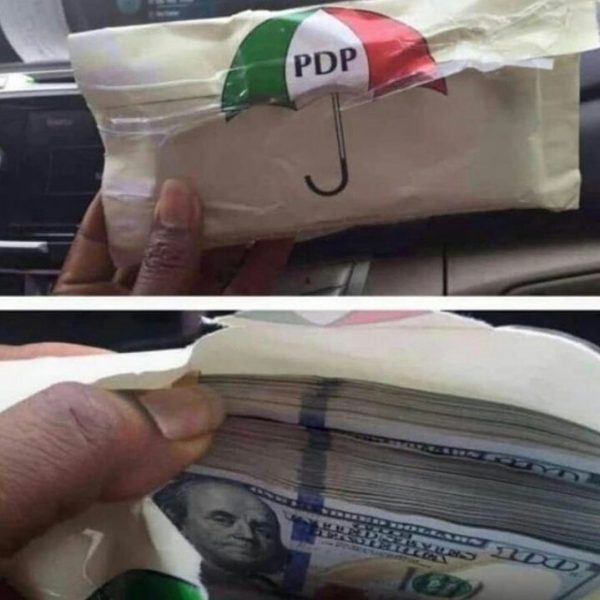 AN OLD image of a brown paper envelope customized with the logo of the Peoples Democratic Party (PDP) and showing some wads of dollar notes in it has resurfaced online during the just-concluded presidential primaries of the party.

At the party’s primary election held on Saturday, 28th of May 2022, in Abuja, former Vice President Atiku Abubakar emerged as the party’s flag-bearer, the Premium Times had reported.

Following the event, various social media posts have surfaced online claiming that the image was that of monies shared by some of the presidential hopefuls to delegates at the event.

The photo has since gathered various reactions after it was shared multiple times online by different blogs and some social media users in Nigeria.

The photo also circulated widely in several WhatsApp groups. In one of the groups, a user claimed that that was the money given to delegates last Saturday at the PDP special convention where the primary election was conducted.

“This is what they shared to delegates at PDP primary elections today in Abuja. Money politics at play,” the caption posted alongside the photo read. Another user posted the same image but with a different caption that read: “they even customized the envelope.”

Photo shows money shared to delegates at the PDP primary election in Abuja on Saturday.

When the image was subjected to a Google Reverse Image Search, the results show that the photo has been on the internet since 2015.

The photo was first uploaded online on the 20th of March, 2015 by one City Rovers blog, as archived here.

Also in December 2015, it was posted online by the Nigerian Television Authority (NTA) and another blog, Kanyi Daily later.

Further findings by The FactCheckHub revealed that the same image resurfaced online three years later, precisely in 2018 when the PDP held its presidential primaries for the 2019 election. During that period, it circulated online with posts alleging that it was money shared to delegates at the 2018 PDP primary election. It was reported here, here, and here, as archived.

The FactCheckHub observed that since 2015, this same image has resurfaced on the internet during election periods.

The claim that the image was from the 2022 PDP presidential primary election is FALSE, as it is an old photo that has been online since 2015.

2023: How true is the claim that Sule Lamido, son and daughter won PDP primaries in Jigawa?