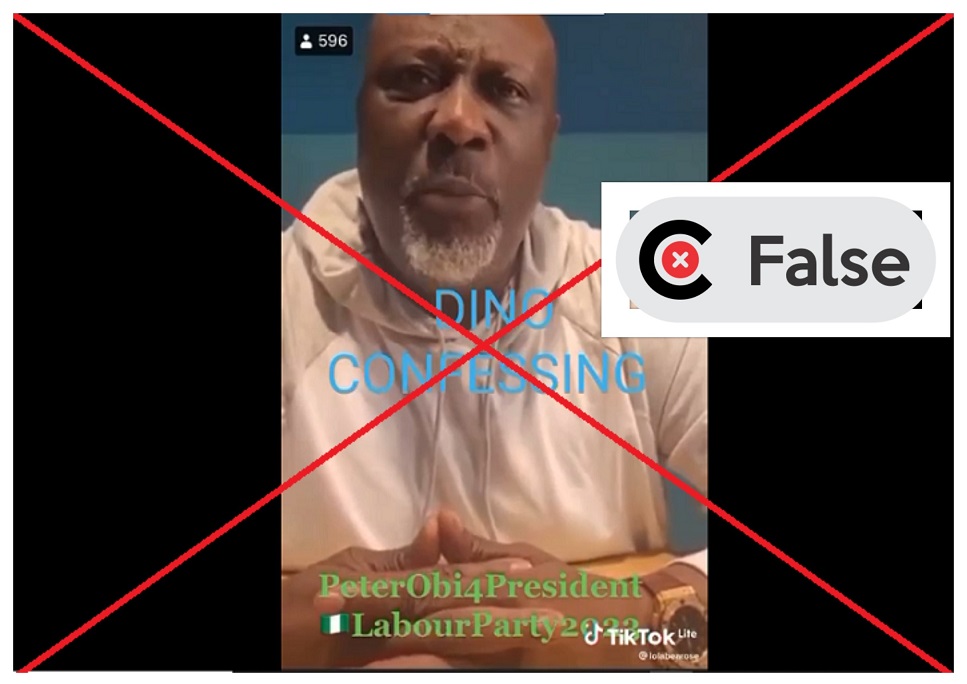 A screenshot of the viral video of Dino Melaye.
Reading Time: 3 minutes

A video, which depicted Senator Dino Melaye expressing his support for Peter Obi, the Labour Party’s presidential candidate, ahead of Nigeria’s 2023 general elections, is circulating on social media, especially on WhatsApp.

This is coming few months ahead of the country’s general elections billed for February 2023.

Melaye, a former Nigerian senator and one of the spokespersons to Atiku Abubakar, the People’s Democratic Party’s (PDP) presidential candidate, said in the video footage that Obi is fantastic and a good man. He added that the Obi movement should continue, noting that everyone should be part of it.

“I wanna say, it is time for us to think. I encourage the crusade, the movement started by Peter Obi to continue, move from campus to campus, move from community to community, move from one progressive group and organisation in this country to another to campaign for the new Nigeria that is to come and be part of the movement,” Melaye said in the video.

The 38-second video was traced back to a TikTok account with the username @lolabearose, with a caption that read:

“Thank you, Mr Dino, for always saying the truth.”

The video post has garnered a significant amount of interactions with over 500 views, over 200 likes, 80 comments and shared 119 times as of 2:00PM on Thursday.

One TikTok user, @tapcurrent, apparently in consensus with the post, commented that PDP might merge with Obi’s Labour Party.

“Hahahahaha, they have started to revise the truth. Don’t be surprised that PDP will merge with LP.”

Another user, @user kingh, stated that Melaye might switch from PDP to LP hopefully.

“Mr Dino is coming into the Labour party this week by God grace and u are going to handle that aspect of the campaign,” the user commented.

Nigerians have expressed some doubts as to the credibility of the video since it went viral online, even as Melaye reinstated his support for Atiku last Saturday.

When the video was analysed on Deepware – a tool used to determine whether a video is a deep fake or not, the results show that the video is not a deep fake.

When the footage was subjected to further analysis using the InVid video verification tool, findings from the video fragmentation revealed the clip was taken out of context from a longer and original version.

“Obi is a fantastic and a good man, but he lacks the capacity to unify Nigerians.”

In the full video, Melaye pledged his support for PDP’s Atiku Abubakar and downplayed Obi’s candidacy ahead of the election.

Melaye further stated that Atiku is a unifier and outlined some qualities which he believes make Atiku the best candidate to be president.

“So, we need one Nigerian, who is going to be trusted by every part of this country, who the north will believe in, who the south will believe in and that person without blinking eyes is Atiku Abubakar,” he asserted in the video.

Even though Melaye did say the exact words in the footage, however, the context was attributed to Obi’s role as Atiku’s Vice President when the duo unsuccessfully ran for the presidential elections in 2019.

In fact, Melaye further shared the same YouTube video on his Twitter account with a caption that read: “WATCH……SDM.   Peter Obi is Fantastic and a good man, but he lacks capacity to unify Nigerians. Unity is more important than cutting cost of governance.”

Findings show that the claim is FALSE; this is because even though Dino Melaye was talking about Peter Obi, he wasn’t showing support for the Labour Party’s presidential candidate as claimed on social media.