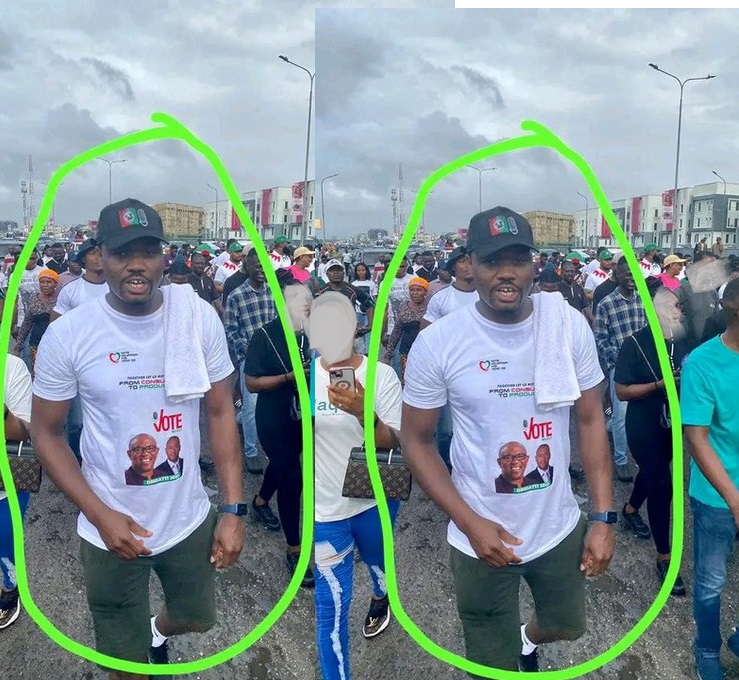 A picture claiming that the son of Obafemi Hamzat, the deputy governor of Lagos state, participated in the Lagos rally organised by supporters of Peter Obi, the Labour Party’s presidential candidate, has surfaced online.

On Saturday, October 1, 2022, Obi’s supporters held rallies in several parts of the country, including Akwa Ibom, Lagos, Gombe, Bauchi, and Edo, among others.

The LP supporters held the rally as part of activities to mark Nigeria’s 62nd Independence anniversary, having gained independence on October 1, 1960.

Obafemi Hamzat is a member of the ruling All Progressives Congress (APC) in the state.

Several posts of a particular man who participated in the Lagos rally have surfaced on social media. Most of the posts claimed that he is the first son of the deputy governor of Lagos.

One of such tweets archived here reads: “Femi Hamzat, Lagos State Deputy Governor’s 1st Son, joins the movement of Obidient. Dude want to be Yusful to himself.”

Tunde Alao, the media aide to the deputy governor of Lagos, has debunked the claim in a statement released on Sunday.

“For the avoidance of doubt, the gentleman in the displayed photograph is neither the Deputy Governor’s son nor his relative,” he said.

“The viral message is another mischievous, false and malicious attempt to cause friction between the Deputy Governor and his admirers and loyalists across the Nation.

“Dr Hamzat has a reputation of commitment and loyalty to the Sanwo-Olu administration and the All Progressives Congress.”

The headline was updated to reflect the exact photo, while the featured image was changed from that of Obafemi Hamzat to the viral image circulating on social media.

This report was written by The Cable, and republished by The FactCheckHub as part of the Nigerian Fact-checkers’ Coalition initiative. See the original piece here.