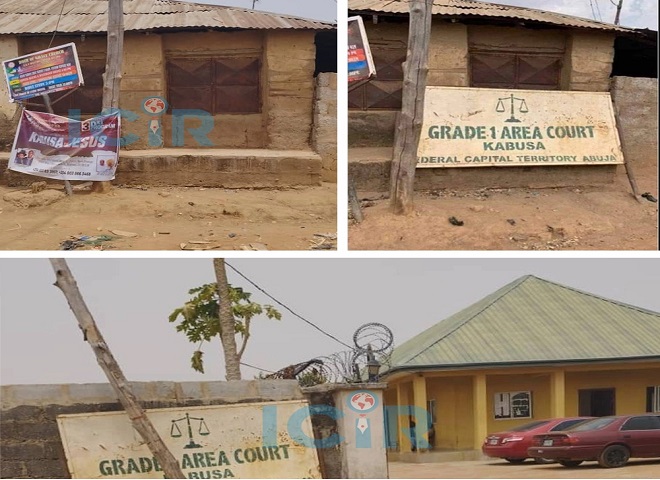 AN IMAGE of a dilapidated building is being circulated across different social media platforms as the Grade 1 Area Court in Kabusa, Federal Capital Territory (FCT) Abuja.

The image shows a white signboard leaning against an old building with “ Grade 1 Area Court Kabusa, Federal Capital Territory,” written on it.

Some Facebook users have made posts decrying the poor state of the said court.

In a post made on March 4, 2022, a Facebook user, Izuchukwu Okoli, uploaded the image with a caption that reads: “Grade 1 Area Court Kabusa FCT.”

On the same day, another Facebook user, Paul Edoh Jnr, posted the image with a similar caption, “Grade 1 Area Court, Kabusa… our judiciary system here no try o,” he wrote in pidgin English.

Taking a swipe at the Nigerian government, another user, Comr Simon Nahor, posted the same image on March 5, 2022 thus:

“Tell me, can justice be delivered in this type of environment? Because even the Magistrate or Judge is suffering from injustice already by subjecting (sic) in this type of court. APC is evil,” he said.

The image was also uploaded on Twitter by a Human Rights Activist and lawyer, Professor Chidi Odinkalu.

Though he did not directly describe the old building as the Kabusa Area Court, Odinkalu posted the image with a hashtag that read: #WhereIsJustice?

The post had gathered 20 likes, 20 retweets, 3 quoted tweets and several comments by users on the platform as of the time of filing this report.

The archived version of the posts can be seen here, here, here and here.

The FactCheckHub, however, found that the image and accompanying claims are MISLEADING and FALSE.

During a visit to the Grade 1 Area Court, Kabusa, The FactCheckHub confirmed that the court was a different building from the viral image.

The old building in the viral post was situated a few blocks away from the court.

According to a court official who pleaded anonymity for lack of authorisation to speak to journalists, said the signboard had been placed in front of the building (in the viral image) to give directions.

The official also told The FactCheckHub that the court has existed at its present location for over five years, but the picture of the old building started circulating in March 2022.

“That building in the picture is just one of these houses close by. The signboard was placed there to help people with directions, but we have since removed it from there.

“This court has been here for quite a while. I was posted here in 2019 and this court had been built long before then,” the official said.

A visit by The FactCheckHub to the location of the old building showed that it was one of the residential houses around the area.

Other images of the Grade 1 Area Court, Kabusa can be seen below:

It is clear that the dilapidated building is not the Grade 1 Area Court in Kabusa; thus the claim that the image in circulation shows the court is FALSE.